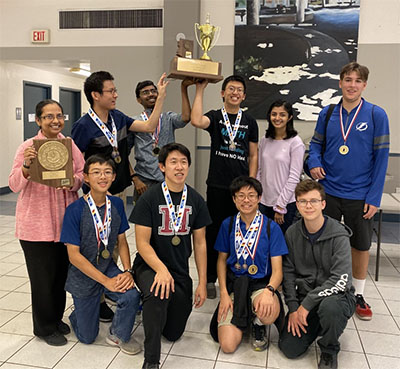 Congratulations to the Hamilton Chess Team for winning the AIA State Team Championship in November! They went with a perfect 5-0 to the tournament, completing their perfect 19-0 season -- the first in school history! As the top-seeded varsity team, Rick Sun, Kenneth Su, Joseph Wang, Michael Chen, and Vincent Sin defeated the second, third, and fourth seeds in three straight matches en route to their title. Their compilation of 54 wins, 2 losses, and 1 tie over the last three seasons has given them their second title in three years, only missing the title last year on tiebreaks. With the chess team only in their fourth season, they have truly accomplished a great feat. In addition, Aryan Eksambe took first in the JV section, and Harry Winsberg also took a top-10 finish. Anvi Joshi, Miro Vanek, and Andrew Quan rounded out yet another strong showing of Hamilton's depth in the JV section, scoring well above expectations.

Click to: Jump to Top | BRAG about our school!
translate
Copyright © 2002-2020 Blackboard, Inc. All rights reserved.