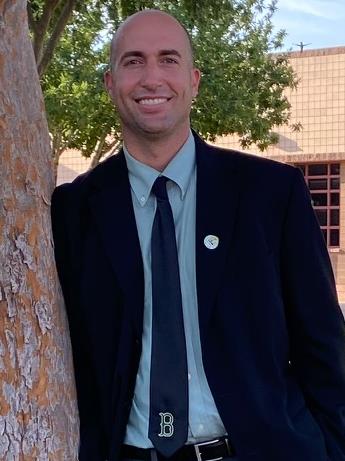 Marques Reischl is our Principal at Basha High School.

Prior to that he was an Assistant Principal and Athletic Director here at Basha. Previously he was the Dean of Students at Chandler High School.  Mr. Reischl was a football coach, basketball coach, and head tennis coach at Basha High School prior to starting his role as an administrator.

Mr. Reischl graduated with his Masters in Educational Leadership from Western New Mexico University. While at WNMU he lettered in 3 varsity sports, football, basketball, and tennis. After his college playing career Mr. Reischl went on to play arena football for two years. After his playing career was done he began coaching at WNMU. He coached at WNMU for 6 years before coming to Basha.

Mr. Reischl is married to the best coach’s wife ever, Meredith and they have 3 kids Marlei, Magnahni, and Moses.